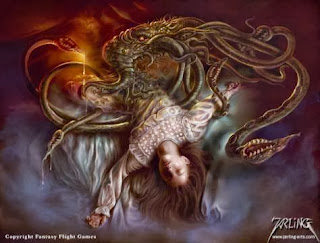 A slight breeze blew through the changing leaves
In the woods surrounding our town;
The streets were empty, the pubs were cleared,
The townsfolk had all bedded down.
The moon hung low as the fog rolled in
And I could hear a lone wolf bay;
Then I heard scratching at the window
In the bedroom where I did lay.“’Tis just a branch from the old oak tree,”
I said to no one but myself,
“It’s just the wind, could be a mouse,
“Or merely a mischievous elf …”
But a sense of foreboding took hold
And a chill ran straight up my back;
I have to admit that I was scared
Being alone there in my shack.I wanted to look but couldn’t move,
I just waited and held my breath.
Suddenly I heard the window raise
And then I smelled a hint of death.
I’d have thought it thieves, but for the smell –
It was the rank scent of decay;
‘Twas then I heard his step on the floor –
I silently began to pray.But God wouldn’t hear my prayer that night,
I felt the intruder come near;
Then suddenly he was upon me
And my soul filled with dread and fear.
He tore the covering from my bed,
Thus exposing me in my gown.
Then we locked eyes momentarily
Before he began to bend down.

He ran a finger along my cheek,
And brushed a stray lock from my face.
And then he pressed his lips upon mine
My poor old heart began to race.
He slid his hand slowly up my thigh
And then up and under my clothes;
He pulled my gown up over my head
While I lay there helpless and froze.

I was in a trance, helpless to fight
As he acted his will on me;
I was a virgin before that night
I had just turned twenty and three.
He took his time in enjoying me,
He was oddly gentle and kind;
And he never spoke one word to me
The whole time that we were entwined.

He bit my neck as he spilled his seed,
Then he made his leave and was gone.
I must have fainted, my mind went blank,
The next thing I knew it was dawn.
I thought it a nightmare, or a dream,
Til I spied his mark on my throat.
And it wasn’t but a month or two
Til my belly began to bloat.

The townsfolk began their gossiping,
As my belly grew more and more.
I was forced to move and change my name,
Labeled a trollop and a whore.
Then nine months later, in summer’s heat,
In a field overgrown and wild,
My demon lover’s fruit came to bear –
I gave birth to a handsome child.

He had olive skin and coal black eyes
And a smile as sweet as sin.
Outwardly he was like an angel,
But I sensed the evil within.
I couldn’t allow the child to live,
And I knew what I had to do;
I picked up a rock from off the ground
And I bashed his precious skull through!